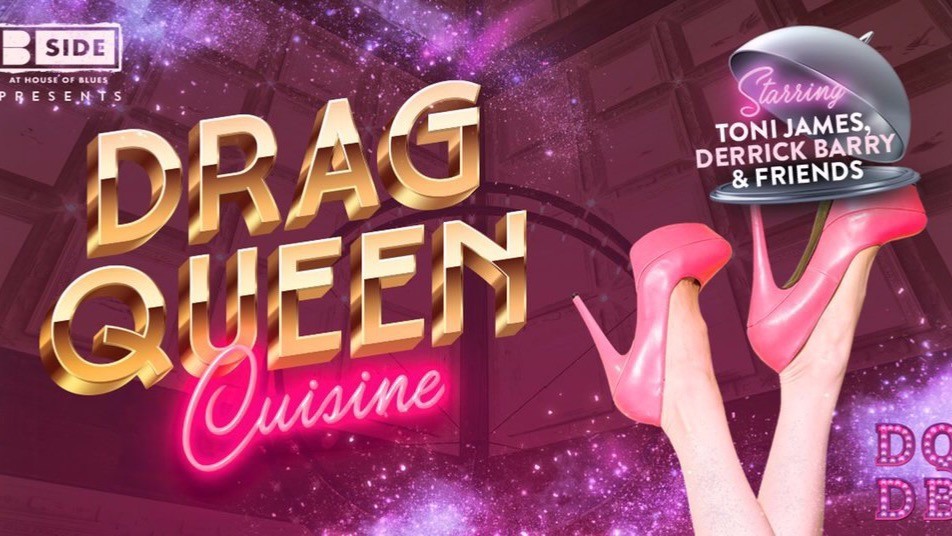 Feast Your Eyes on ‘Drag Queen Cuisine’ at House of Blues

All-You-Can-Drink packages are available and include well spirits, domestic beer and house wine. Selections from B Side’s food menu will be available for purchase.

Tickets for Drag Queen Cuisine start at $35 for General Admission, $65 for Reserved Seating plus applicable fees and go on sale Friday, April 26 at 10 a.m. PT. Reserved Seating tickets come with a $35 dining credit that can be used towards B Side’s food menu or an All-You-Drink package. Follow House of Blues Las Vegas on Twitter for presale information @HOBLasVegas. Tickets are available by visiting HouseofBlues.com, MandalayBay.com, Ticketmaster.com or by calling 702-632-7600.

For more information about the cast, visit the International Drag Queen Database at dragqueen.info/dragqueencuisine.

About Toni James
The queen of queens, Toni James is considered a Las Vegas drag legend, and is arguably one of the most popular emcees in Las Vegas history.  He has performed in numerous casinos on the Las Vegas Strip and performed with celebrities such as Jessica Simpson, Cindy Lauper, Sting, Oscar Goodman and Ru Paul. Toni has hosted events including “The Toni James Lip-sync Contest,” emceed for AFAN’s Black and White Party, and various Golden Rainbow events.

About Derrick Barry
Derrick Barry gained international attention as a Britney Spears impersonator on “America's Got Talent.” Barry has performed on the Las Vegas Strip for more than 10 years. His spot on impersonation led him to roles in music videos for Katy Perry and Eminem. His most recent cameo includes Olivia Newton-John’s No. 1 hit “You Have to Believe.” He’s traveled the nation following Britney Spears’ Circus and Femme Fatale tours and performed in dozens of countries. Barry starred as Britney Spears and Lady Gaga in “Divas Las Vegas” from 2009 to 2015. During that time, he also opened for Lady Gaga in Las Vegas.

About House of Blues
Founded in 1992, The 11 House of Blues are located throughout the United States and form the country’s pre-eminent group of intimate music venues.  Each features state-of-the-art sound and lighting technology in one-of-a-kind custom designed environments aimed to bring fans as close as possible to the artists.  Every location’s restaurant and bar is adorned with signature original folk-art – part of the world’s largest collection – combined with the House of Blues legendary hospitality and tantalizing cuisine.